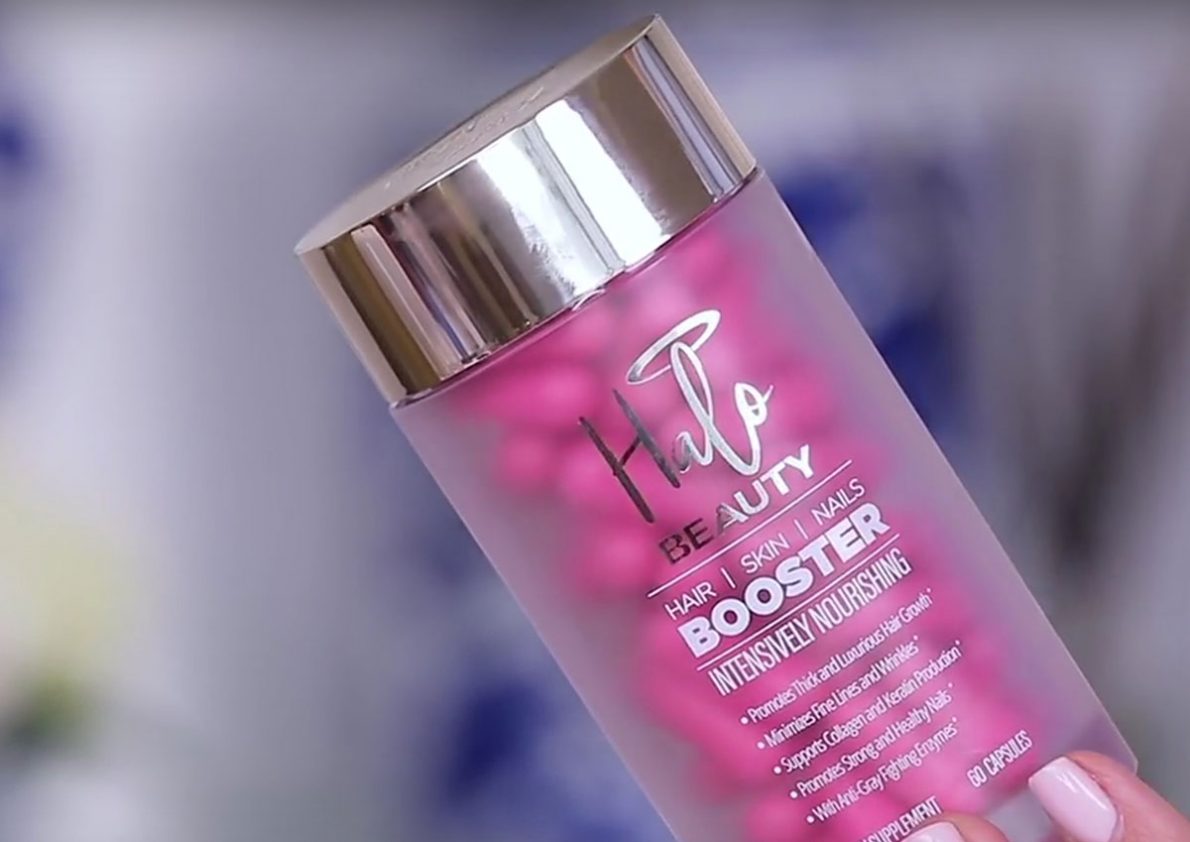 I have to say that the launch this week of the Tati Westbrook HALO BEAUTY Hair Skin and Nails SN Booster $39.95 took many in the Youtube beauy community by surprise. The stir it cased was massive and that’s an understatement. You see, Tati took a risk. She produced a product that was a one-size-fits all, beauty multivitamin. This post is not as much as the product itself, so much as the furor that it created.

This was a surprising move, but a clever one from Westbrook, as no Youtuber has made a move like this. It shows innovation, dedication and thinking outside the palette. Which kind of sums up Tait. She’s never been one to deliberate attract shade, she keeps clear of other mega Youtubers’ drama and is honest with integrity on her product reviews.

She’s done her research. Most of the products can be found in a less expensive hair skin and nails supplement, but Tati has packaged and marketed this aimed squarely at her audience. They are predominantly female, thus the cut pink casules, and frosted glass bottle with silver foil and a silver cap featuring her name. This bottle would sit beautifully out on the bench of any self-respecting makeup addict.

This also follows a trend. Recently, I went to the launch of Beauty Booster’s skin supplements (they have 3 which target different areas). I did a 2 week test and my skin was nice, but it was before the text, so it’s hard to prove. Beauty Boosters is licensed as a clinically effective supplement with the Therapeutic Good Administration (TGA – in Australia) which is the FDA equivalent. Tati’s formulation isn’t registered or licensed with the Food and Drug administration (FDA – in the USA). Either she has launched early or there is nothing revolutionary about the formulation or the formulation had problematic ingredients. I’m not a chemist, so I can’t tell you that. That is not what this post is about.

The main issue for me was the mass shade that was so bad, Tati even had to close off comments on the You Tube announcement due to the intense negativity and even personal attacks…over a vitamin. I just don’t get what makes people angry.

The product is also soy-free, gluten-free, sugar-free, vegan, cruelty-free and all the things that are important for new products in the beauty space.

I believe that she’s done a lot of research, it’s not a private labelled product, unlike many beauty influencers who bring out products by selecting from a set of shades already in existence, and brand them as their own or a collaboration, which is really just a name licensing exercise.

There are also arguments that most garden variety multivitamin contains the similar if not the same ingredients.

Some key ingredients that are unique include:

Catalase – said to fight free radicals, which are theorised to slow the ageing products. You can term back time, but you can attempt to slow its effects down.

Saw Palmetto – affects oestrogen levels, so to be use with caution by men but has also been said (anecdotally) to increase breast size.

According to Web MD:

I’d check with my GP before taking this.

Why is there drama of Tati’s announcement?

I think people were surprised that über guru made a supplement. But to be it makes so much sense because beauty comes from within, and if you care for your body’s largest organ, skin, then beauty will be easier to accomplish.

There were those Youtubers and followers who didn’t “get it”, so I’ll break down what I think the strategy is:

I think the reason the beauty community was quick to throw shade, was pure and simple jealousy “why didn’t I think of this?“.

Tati is a standout beauty guru who appeals to a large age range of mainly women, she never misses a beat, she’s beautiful, clever and very savvy. It makes sense she did a serious product. She’s a serious business woman.

For those who were asking “if this supplement is so good, why does she need so much makeup?” I have the answer. On camera, everyone looks better with makeup. Yes, she covers her grey hairs, yes, she wears extensions, yes she wears makeup. Supplements can only do so much. People want to see the glamorous Tati we know and love, not the Tati that just got out of bed.

The nay sayers came after Tati, saying she has no place developing a product about which she has limited knowledge. So do we criticise other beauty influencers who come out with eyeshadow palettes? Do they know what every ingredient is in an eye shadow, what is pigment, what is binder, what proportions of each? Of course now. That’s why we have cosmetics chemists in labs helping. And the same with Tati. She has spent a lot of money on R & D to get this over the line. She hasn’t just picked a colour from a shade selection and then rebranded it.

If you find yourself criticising her, take a second to think about the real reasons you are against the product or Tati herself.

I say to Tati Westbrook of Halo Beauty “what a clever more – go for it”. This product is a piece in a larger strategy. People will always try to cut you down when you deviate from their limited imagination. It’s a great brand move in my opinion. Can wait for the sequel!