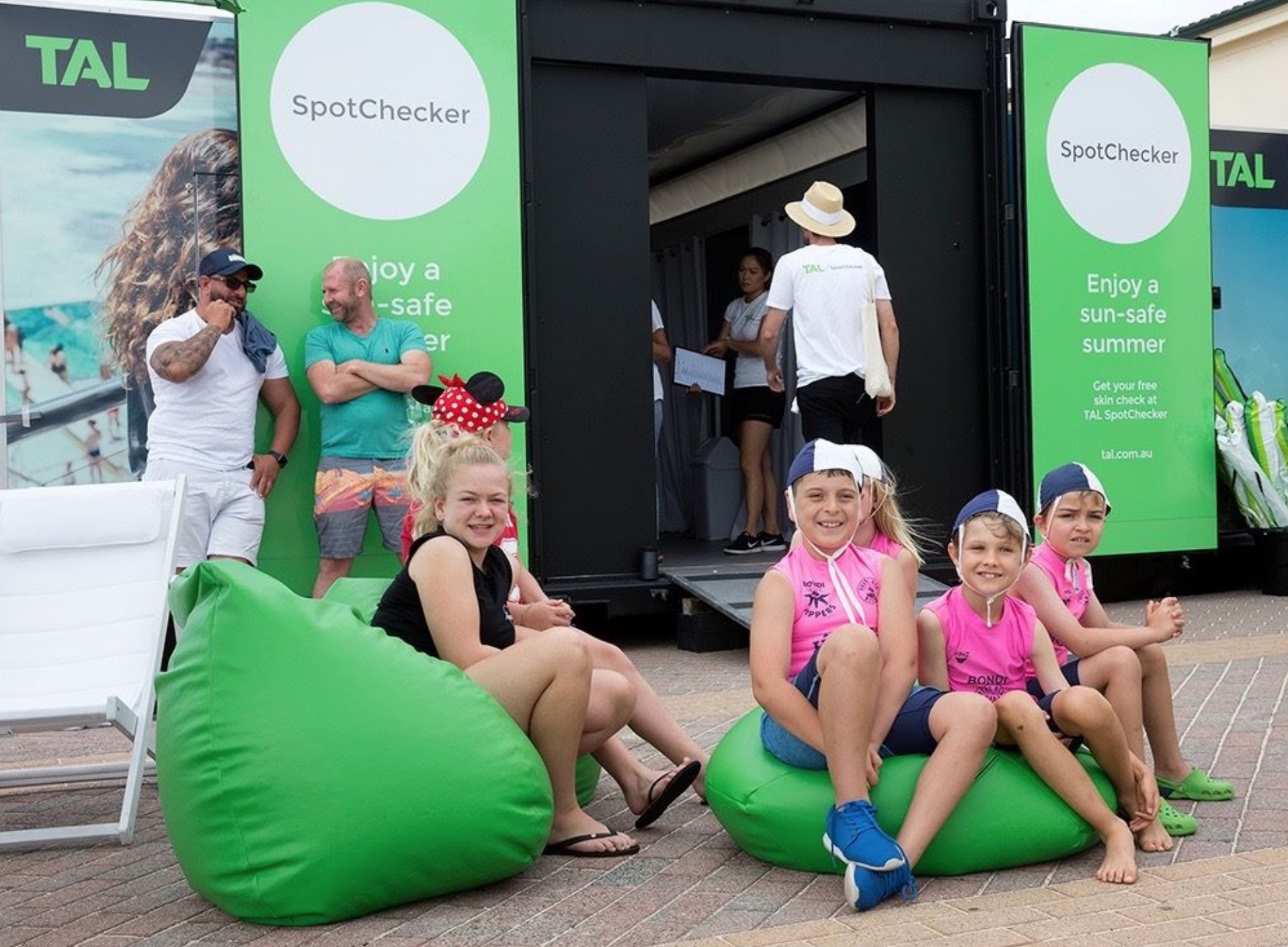 Don’t Bury Your Head in the Sand About Melanoma

It’s now summer and all the beach bunnies are heading down to the sand with little thought of melanoma. Be sure to protect your skin: slip, slop slap. Wear sunscreen, wear a hat, wear a UV protecting rashie. If you want a tan, go for a spray tan or the use the home variety. Your skin’s aging and potential for cancer will thank you later. Melanoma is very real. And it can be a killer. Yet, despite this TAL research found that 9 in 10 Australians (95%) understanding the importance of sun safety, 71% have not had a skin check in the last year, and 39% have never had a skin check.

A few weeks ago I answered PR a call out for someone who had experienced the loss of a friend or family member to melanoma. I had to respond, to give my beautiful uncle Robbie a voice, since he lost his life last year to an aggressive form of melanoma. From diagnosis to funeral it was about short 6-8 weeks.

I wrote Robbie’s story and sent it to them, a brief version, below is a longer version. I am happy to share this, as Robbie would have wanted to share the messages of sun safety.

I hadn’t had a lot to do with Robbie through my life, except to know that he was a total hippy/country organic farmer at Darlington Point, in the NSW Riverina area. He’d worked for a lot of large commercial organic farms, for years, never being supplied sun protect, hats, sunscreen or protective clothing. It was an unspoken rule for granted that the workers were responsible for sun care. I certainly hope this has changed as practice or we are going to lose a lot more farm workers in the next few years.

He did always wear a hat, it was his signature. He never went anywhere without it. Anyway, he and his doting wife and 5 cats were inseparable in their river side home. It was no palace but it was their sanctuary and they were so in love and happy for many years.

I got a phone call from my Aunt Jen, who was inconsolable saying that her darling Rob was in Sydney, on his own, and could I please go over to the hospital and get the information. I work from home and so I put my work off for the day and raced over to the other side of the city to St Vincent’s Hospital. Robbie had woken up completely disoriented, which his much prized beard gone, and half a shaven head and an stables holding his scull together. He’d had a headache, then blacked out, and woken up in a hospital with the staff telling him that he was in hospital and he wasn’t at home. He was convinced in his morphine induced state that someone had taken his home and wife from him and he was shackled for the safety of the staff. He was over 6 foot and strong as an ox, which made his delusions more dangerous for staff so he needed a voice of reason and trust. I went in there and held his hand and talked him down and helping him to relax.

The doctor said he’d had a brain bleed and when they operated they found a large tumour and the results weren’t back yet. While they tried to get it all it was wide spread and being in his brain you can’t just cut the brain up. Kidneys, liver and other organs can be operated on effectively or even transplanted, but brain cancer is rarely treatable. The doctor was lovely and I was the go between until the rest of the family arrived in a few days and was able to set up a Facebook Group for the family to share news.

He wife Ruth was driven up from the country, and after I tried to book her into the family’s hostel, which was a short walk from the clinic, she fell over on the walk to it. I realised she didn’t have the emotional or physical capacity to get herself to and from the hostel.  This was a big dilemma, so I suggested that she share my bed, despite being in Dee Why, because I could drop her door to door. My husband was prepared to sleep on the couch. She was lot older than Robbie and very frail, which is why I shared with her. Then began a month of back and forth to the hospital.

Robbie was used to being on the land. The environment of the hospital was completely out of his comfort zone, especially with the sound of Darlinghurst through his window. In a few days of emotional visits, Robbie went wild, I think in part do to his total lack of control (bladder and everything else – the family made jokes about the bottle of apple juice at the foot of the bed not tasting so good – even in a crisis our family finds humour – it’s how we cope) as well as a claustrophobia about the MRI machine (he had to be sedated in order to keep him under it).

Then the entire Brown family descended upon Sydney. I don’t think Sydney was ready. My mum is one of seven so there’s a lot of them. They are all tall and loud, many from the country. I am an anomaly being of average height and living in the city. I take after my nana Jean who despite giving birth to giants, is like a little bird. Nana Jean was in consolable as you can imagine: her first born son. A parent should never have to bury their child.

The doctors suggested a few rounds of chemo treatment to prolong his life a bit and cheep the cancers from growing so fast, to give him time to sort things about, but chemo is a brutal treatment. It was so surreal. At the end of a month, Robbie could see the toll it was taking on his wife Ruth, so begged her to go home and take care of the cats. He wanted to picture her there, not see him in decline.

Reluctantly, but with relief I think, Ruth went home, and Robbie was alone for 4 days a week. His daughter, from Canberra, a larger than life personality, was able to come up for 3 days of the week, and stayed in the family hostel, so I got my home back.

There were the four days a week that he was alone. I took the opportunity to visit at least once a day on those days. He would tell me stories, in bushman’s terms “yarns” and I filled him in on my life. We talked about art, philosophy, poetry, drawing. He is, like many in my family, very gifted creatively and began to draw as a way to keep himself sane. I brought him paper and art supplies. I looked forward to these visits. I’d grab his Dare Ice Coffee, some sushi and other tidbits I could tempt him with, and pop my head around the corner and I’d see his huge grin and he’d say “g’day darlin’ ” and his whole face lit up. I think we both enjoyed this precious time, despite the circumstances. We developed a very special bond during this time and became very close. He joked that he was adopting me as his second daughter.

We discovered his cancer was and aggressive form of melanoma, and was in all his organs. It was up to him how to choose to proceed. The goal was to get him strong enough for the trip back to Wagga Base Hospital where they had the resources for his palliative care. He wanted to go home to die. So with that go in mind, he did his physical therapy, and stabilised, to the point that the doctors were happy with transporting him.

So back to Wagga he went, in the patient transport vehicle which broke down in Golburn, and they had to wait 2 hours for a replacement vehicle. It was very distressing for Robbie, who was used to being in charge of his life. That’s the think about cancer, not just melanoma. It’s not just the fact that in some cases it is terminal and can be very painful, but it takes away your sense of self.

His goal them was to get well enough to go home. He wanted to be in his own bed. He had this idea of all the things he wanted to grow in his green house. All the art he wanted to make. He made it home too, but it was soon obvious that he needed the care that only being an inpatient could give, so ended up back in the hospital. It became clear that the end was in sight, so my nana, and some of the relatives went down to say their last good byes, and my nana couldn’t cope and needed to leave and go home to grieve privately. Everyone approaches grief differently, so people are more open, some close down. It can create friction in some families. I was in Sydney taking care of my family when I got the call he had passed away in the night. It wasn’t a nice death if there is such a thing. It was fight. It was traumatic. Melanoma is a horrible way to go.

I read the eulogy. I was the oldest of all the cousins. It rained, and felt like the day was mourning him. He was buried in the local graveyard in Darlington Point, by the river, under the gum trees. I’m pretty good in a crisis, so got through it, helped with the wake, which was “dry” as per Robbie’s request. It took everything I had to get through that time. When I see people deliberately baking my heart breaks, as I know the repercussions of the “natural tan”.

As a child I watch my father have cancers burnt of his face and hands, and now I am seeing the sailors, and formerly tanned friends have to have their faces burned with a special chemo creme. It’s painful and temporarily disfiguring. There is nothing glamorous or healthy about about a tan from the sun.

So How Can I get Checked and Catch The Cancer before it Spreads?

Leading life insurer, TAL invited me to the launch of the nationwide pop up skin check clinics called the TAL SpotChecker:

Leading life insurer, TAL is trying to develop innovative way to protect every aspect of this Australian life. Making sure that they cut through the sun safety commercials is a tough call. It’s a little like the “blindness” smokers of the world looking past the horrific packaging images. Australians do understand sun safety is important and that skin cancer is one of Australia’s most common cancers, with almost 14,000 people estimated to be affected this , but it is also the most detectable and preventable”.

A quick and simple way to identify any irregular spots is to get your skin checked annually by a professional and research shows that if detected early, melanoma can be effectively treated, saving you the pain and heartache my family went through.

The TAL SpotChecker initiative shows the TAL committment to support more Australians in detection and prevention of skin cancer. As such TAL have this wonderful program to provide complimentary skin checks from skin cancer doctors at some of Australia’s most iconic locations this summer.